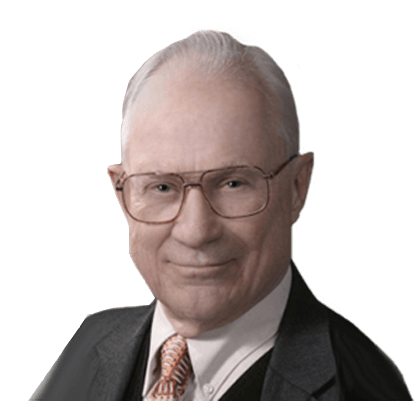 From the Eulogy given at John Juergensmeyer’s funeral on October 11, 2014, written and delivered by his long time friend and client, Rick Jakle:

John Eli Juergensmeyer was born in 1934 with solid Midwestern values in downstate Illinois. The town was Stewardson. John remarked over the years how ironic it was that Stewardson was only 10 miles from the small farm town I grew up in, but that our paths never crossed until we met in Elgin Rotary in 1967.

A product of the Palmyra and Carlinville, Illinois public schools, where his father was Macoupin County Superintendent of schools, John attended the University of Illinois during his undergrad years. He went on to receive his master’s degree in politics and his doctorate in philosophy at Princeton University. He earned his JD from the College of Law at the U of I in Urbana.

He was admitted to the bar in the State of Illinois in 1963 and practiced law for over half a century. In 1964 he established his law firm in Elgin: Juergensmeyer & Associates, P.C.

One of the things that was immediately apparent when you first met John was his keen intellect. He served with the United States Air Force Intelligence Service in the Far East, leaving as a Reserve Captain.

John was a member of Phi Beta Kappa from 1955 on. He knew a lot, about all kinds of things. Not just law. But also philosophy. And current affairs. And certainly all matters political. And how to raise tropical fish. Or scuba dive. Or garden. Or be a faithful and loving husband, a good father and a devoted grandfather.

After granddaughter Kirsten was born nine years ago I knew I couldn’t ever call him after 2 in the afternoon on Fridays. Most every Friday he would leave the office to spend the afternoon and evening with her. He always called her the “The Princess,” and what a joy she was to him!

In 1964 he married Betty, his intellectual and spiritual match. Together they celebrated their 50th wedding anniversary in this church last Fall.

He was active in so many Elgin civic organizations, including the Jaycees, Boy Scouts and the Salvation Army, just to name a few. In the late 70s and early 80s John was on the board of directors of the Elgin National Bank, and then served for many years on the Advisory Board of the Valley Bank and Trust Company.

In 1977 John became President of our Elgin Noon Rotary Club and that year marked the very first and, I believe, the very last time John ever showed up on time for the beginning of a Rotary meeting. If you saw him entering the Rotary Club meeting room before you did, you could be darned sure you were going to be fined as “the last one in.”

And that’s because John wrung the most out of every second of every day whether he was practicing law, spending time with his family, scuba diving off the Galapagos Islands, trekking around Antarctica, or volunteering for a worthy cause. He had endless energy and at 80 would still ride his bicycle, in the evening, back to his office.

John had his own “style” when it came to running our Rotary meetings. It was very casual and very personal. He would start off each meeting during his Presidency by shouting “Hi, Rotarians!” And we all were expected to holler back “Hi, John!” Which we did, and decades later many of the club’s old timers would spot John across the room and sing out “Hi, John.” That always made him smile.

It should come as no surprise at all to you that John was an Eagle Scout. He exemplified the virtues, the values and the principles Scouting stands for. What might surprise you is the fact that both his older and younger brothers, Charlie and Mark, also attained the lofty Eagle Scout designation. Which should perhaps give you an idea of the sort of family stock John sprang from. Imagine that, three Eagle Scouts – Scouting’s highest achievement – from one small town family. A singular achievement and a sign of significant accomplishments yet to come.

John loved his family and was so very proud of their outstanding accomplishments. His wife, Dr. Elizabeth Juergensmeyer, Betty, only recently retired from her position as Professor of Developmental Biology and Chairman of the Science-Math Division at Judson University, where she served as Faculty Moderator. John and Betty’s daughter, Dr. Margaret Ann, along with her husband Brian Juergensmeyer, is active in space biology, and daughter Frances Elizabeth in library and computers. Here’s another amazing fact about the Juergensmeyer family: Betty and Margie have had experiments on several NASA space shuttle and MIR satellite missions.

John was a committed member of Wesley United Methodist and both John and Betty served as United Methodist Lay speakers, and many of us have heard John eloquently preach in this sanctuary. Many of us have also heard him serve as a passionate advocate for the unborn. He was chairman of the Life Center and volunteered as their legal advisor for decades.

Over the years John provided church services and gave moving sermons for more than three decades at nursing homes throughout the area. One of his associates told me that John always treated everyone respectfully and equally. He afforded the same level of respect to the office cleaning lady that he would to a judge. She said: “A few weeks ago I was in his office going over files and John got a phone call from an ambulance transport company. With the mountain of work that he had to do, here he was trying to arrange transport for a lady in a nursing home who was in a wheelchair and wanted to attend church.” That was John!

John’s office staff was an important part of his extended family, this small but excellent team had been with him a total of more than 100 years.

One of the things I treasured most about my relationship with John was his diligence and his “never give up” attitude. In the late 1970s I was trying to find a new transmitter site for one of our radio stations and was told by several realtors in the Elgin area that the land, in the location it had to be, was just not available. It wasn’t going to happen! John said: “Is that so? Come on!”

And so off we went one Spring afternoon, John was dressed in a brand new almost white ice-cream-truck-driver’s suit, and we began knocking on farmhouse doors all over that part of Kane County, and trekking through feed lots and pastures to look at land. It had rained real hard the night before and the pants of his white new suit were quickly covered with mud. Totally trashed!

We found the parcel, bought it and he got it zoned for our radio towers. But his new white suit was ruined. And every warm day when it looked like an ice-cream-truck-driver’s suit weather, he threatened to bill me for it. Dozens of times. But he never did. We were just laughing about it again the other day.

John was the picture of persistence. Years ago we flew out to Washington, D.C. for some FCC legal work. I had promised John a great dinner at my favorite seafood restaurant out on the Potomac River. It was really late that night by the time I got the plane tied down and rented a car. It was 10:30 when we pulled up in front of the Flagship Restaurant and they were closing up. John got out of the car and went inside, he told them that we had flown all the way out from Chicago to have dinner there, we were delayed because of headwinds, could they possibly serve us. He argued eloquently and finally the manager said “O.K.-come on in.” We were the only people eating in that huge restaurant and we had an unforgettable seafood dinner.

John was patriotic to his core. When we ended our great dinner it was near midnight, I’d had a hard day of flying and it was time for bed. But Juergy wanted to go to the Lincoln Memorial – which we did – many years before 9/11 and tight security. We parked near the Memorial and climbed those long steps, stood beside the massive statue of Abraham Lincoln, and the three Illinois boys looked down the reflecting pool at Capitol Hill.

I looked over and tears were running down John’s sentimental cheeks. He loved our nation.

I think most of you know he also had a well-developed sense of humor. He helped us sell our Beaver Dam, Wisconsin radio stations to a legendary figure in the broadcast business. The guy, who lived next to the Plaza Hotel in New York City, was a very big deal. He was buying the three radio stations as a college graduation present for his son. The night before the closing John and I went out to dinner in Beaver Dam and when we got back to the motel he went across the street to the Farm and Fleet store and bought four giant Wisconsin cheese heads caps.

We got there early for the closing the next morning, and when the cadre of New York City, “I flew here in our Gulfstream jet,” button-down, very sophisticated lawyers arrived for the closing, our side of the table was all wearing the cheese heads.

John told them that wearing cheese heads was just something you had to do in Wisconsin when you sold or bought a radio station. It was “just standard.” And he wanted to know, where were their cheese heads? The high-powered New York attorneys looked at John like a tree full of owls.

Now let’s go back to the beginning. The small farm town of Stewardson, Illinois, where John was born 80 years ago. Wanting to get a feel for John’s birth community, I read the account of Stewardson’s 1974 centennial celebration. The centennial book ended with a poem. I believe that poem so very well describes the way our dear friend lived his life:

We make the world in which we live

By what we gather and what we give,

By our daily deeds and the things we say

By what we keep and give away.

We make our world by the life we lead

By the friends we have and the books we read,

By the pity we show in the hour of care

By the loads we lift and the love we share.

We make our world by the goals we pursue

By the heights we seek and the higher view.

We make our world and here we live,

By what we gather and what we give.

John hired Sue Hansen, at the time a young high school woman, to work in his office 36 years ago – where she still works, today. Sue suggested what I believe to be a perfect closing to our salute to John.

It is from Matthew chapter 25, verse 21, “Well done, good and faithful servant.”